Bake a pie or blog?

I’m broke. My restaurant went belly-up two months ago. My arthritis is giving me fits.  I have a chest cold. My older dog, Moses, has been dead for three days.  I’m an unemployed, achy,  snot-clogged, one-dog chef in his late fifties.

It is a wonderful day to bake a pie.

Actually, baking a pie seems like a better distraction than beginning a blog. I don’t know anything about blogs or blogging.  Owning a restaurant for twelve years has insulated me from this cultural phenomena. During that time my head has been buried in a big, smothering pile of sand.

Years ago, whenever anyone mentioned blogging it conjured the image of a Scandinavian sporting event in the winter Olympics.  If someone mentioned that they had a “blog” I would nod dumbly, wondering if it was a new car, a hybrid house-pet or, worse, an acronym for a highly contagious and possibly fatal disease.  My ignorance–and a fear of all things Scandinavian or contagious–caused me to shy away from bloggers.

Friends and family have encouraged me to write this blog.  They think it will get my “creative juices” flowing again…juices that have all but dried up from the suffocating effects of owning a small business, in a small town, in a shitty economy.  I love my friends and family.  They always seem to know what is best for me.

Still, today, baking a pie seemed like a better distraction than starting a blog.  At the end of baking a pie there is something to eat, with the added bonus of knowing that I have successfully avoided undertaking a distraction for which I have no knowledge or understanding.  That’s a double-header in my success roster these days.

Unfortunately, the pie was a disaster.  The mess that I made prepping it looked like the aftermath of a gruesome multiple murder: raspberry juice, fragments of berries, chunks of rhubarb and wads of stained pie dough were smeared and splattered everywhere.  Within minutes of putting the damn thing into the oven, the pie turned into a miniature volcano.  The crust collapsed and began convulsing raspberry and rhubarb lava onto the baking pan, spewing over the sides of the pan onto the bottom of the oven, filling the kitchen with smoke.

Obviously, this proved to be more of a distraction than anticipated.  The pie tastes really good, even though it looks severely wounded.  Who cares?  My friends and family will love it.
Until the next pie, I suppose I’ll bury my head in this “blog” thing…at least until a better distraction or a bigger pile of sand comes along. 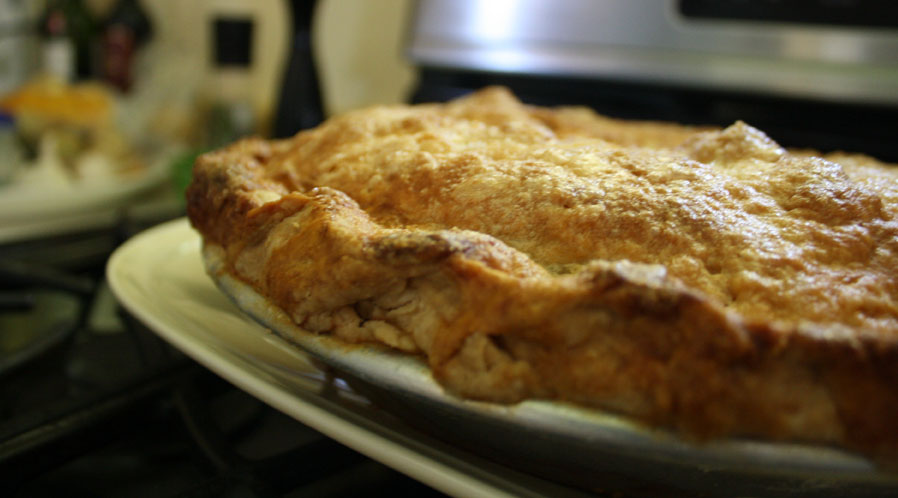 Photography by: Michelle Cyr Plumstead. Do not use without permission.