As a child, I hated spinach.  My mother tried every tactic of persuasion to get me to eat it—to no avail.  Yes, I knew it was good for me—just like every food that seemed disgusting was “good” for me.  No, I didn’t want to be like Popeye—who would want to be a one-eyed, muttering and misshapen seafarer who wasn’t real?  Yes, I knew I wouldn’t get dessert if I didn’t eat it—as if dessert was ever on the menu.  And, yes, I knew all about the starving children in Africa—maybe if we shipped them all of the spinach I refused to eat they wouldn’t be starving any more. 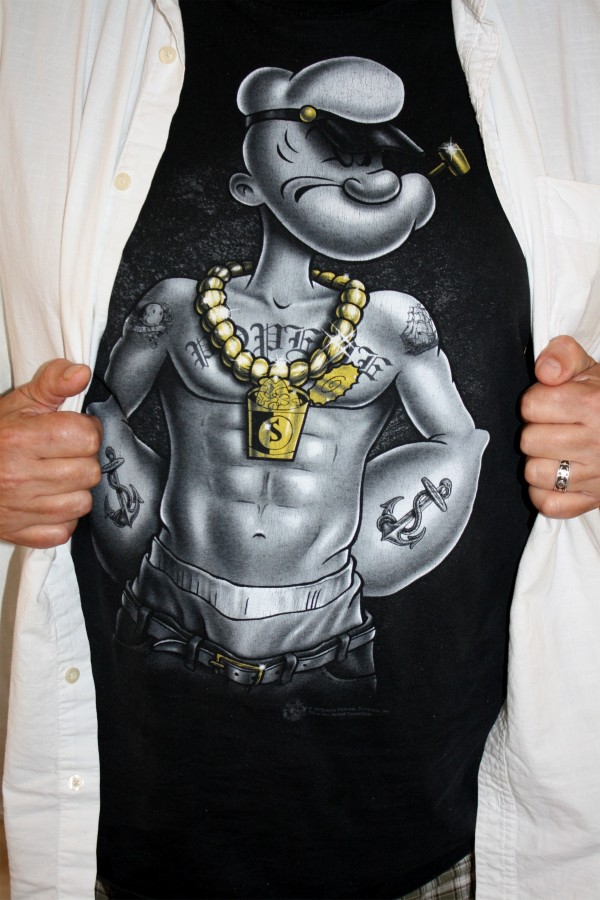 Spinach was first presented to me in an edible form at a Greek restaurant where I worked as a teenager.  It was spanakopita, the savory spinach, Feta cheese and phyllo pastry pie.  The spinach was bright green and chewy, with a tart saltiness from the cheese and fresh lemon, and a buttery crispness from the thin layers of golden brown pastry.  I became a convert to spinach on the first bite.

Spanakopita literally means spinach pie in Greek (spanaki=spinach, pitta=pie).  It is more of a comfort food than a main course entrée, usually served in Greece as a mid-morning or mid-afternoon snack.  Although traditionally served encased in layers of paper-thin phyllo dough, variations using thicker, traditional pastry crusts or puff pastry dough are not uncommon; also not uncommon is substituting the Feta cheese with ricotta cheese or a less salty, creamier goat cheese.

My recipe for spanakopita follows the principles I generally use for all of my successful recipes:  it is easy to make, delicious and can be varied in a multitude of ways by the omission of some ingredients and the addition of other ingredients.  This flexibility is due mostly to the fact that I use puff pastry—purchased frozen at the grocery store—rather than using phyllo pastry or rolling my own pastry.

Puff pastry is easy to work with, provided it is fully thawed but also still cold.  Once it reaches room temperature or warmer it becomes very sticky.  It is best to thaw it overnight in your refrigerator.  If it’s even slightly frozen it is un-pliable and tears easily.  Once you get use to working with it, these obstacles can be easily overcome.

My version of spanakopita calls for frozen, whole, cooked spinach, which has been thawed and drained.  Using fresh, blanched spinach is fine if you want to spend the time blanching it, not to mention spending ten times the money you would on frozen spinach to yield the same amount of spinach my recipe calls for.  I like to keep the cost down on this recipe—and frozen spinach does the trick without adversely effecting flavor or texture.

Keeping the cost down on spinach allows me more of a budget to spend on a good cheese as part of the filling.  Although I love Feta cheese, I prefer softer, less salty, creamier goat cheeses.  Any cheese you prefer will do in this recipe, though—even cream cheese if that’s all that there is in your fridge.  Adding more cheese than I call for in this recipe is up to you.  Adding less cheese will make it no less delicious.

My one departure from traditional spanakopita is that I add sliced, sautéed mushrooms to the filling.  I love mushrooms, especially with spinach.  If you hate mushrooms, don’t use them.  If you want to “go California” on your spanakopita, add some sliced sun-dried tomatoes or sliced artichoke hearts to the filling instead—you can cut back on the bread crumbs the recipe calls for if the sun-dried tomatoes haven’t been re-hydrated, allowing the juice from the other ingredients to soften them.

Finally, whatever size you choose to make your spanakopita—using the two-sheets-per package of puff pastry—is up to you.  My recipe calls for both sheets to be cut into six, fairly even squares, which would be six main course portions, using one sheet for the bottom of the filling and one sheet for the top.  Sometimes, I’ll cut one sheet into six squares, the second sheet into twelve squares—yielding, respectively, three main course portions and six snack portions or portions to serve as a side with a main course entrée such as grilled lamb, fish or chicken.   Any way you portion it, and any way you serve it, it is delicious—even if you think that you hate spinach.  Give it a try—my Mom and Popeye would be proud.

Heat the butter and oil on medium heat and sauté the onions and mushrooms until the onions begin to brown—about 4-5 minutes—then add the minced garlic and turn off the heat, stirring the garlic and spreading it evenly throughout the pan.  Allow these ingredients to cool for 5 minutes.  Then, add them to a large mixing bowl with the following ingredients:

Juice of 2 large lemons (between 3-4 tablespoons)

Mix all of the ingredients thoroughly with your hands.  The cheese will begin to melt from the warmth of the sautéed onion, mushroom & garlic.  If the mixture has any liquid in the bottom, add a little more of the dried breadcrumbs to absorb it.  It is important to get the seasonings blended in well–and your hands are the best tools to use.  This is your filling.  Put it in the fridge to chill.

While it is chilling, preheat your oven to 425*.

Lightly oil a 12X18 inch-baking pan with oil (spray-oil will do).  Take out a box of thawed-but-still-cold puff pastry sheets (Pillsbury is the best & it comes two sheets per package).

Carefully unfold both sheets onto your work surface.  Cut both sheets into six even squares. One at a time, lift each square, and gently stretch them out, being careful not to tear or rip them too much (don’t worry if you do—they are easy to repair).

When this is done, take the filling out of the fridge.  Divide it into six, equal-sized balls & place the balls in the middle of six of the dough squares.

Draw the four corners of the dough squares to the top & center of the balls of filling—this is now the bottom layer of the pie–& you’re almost done assembling.

For the top layer of the pie take each of the six remaining dough squares & place them on top of the spinach filling, lining up the corners of the dough with any of the filling that was not covered by the bottom layer of dough. Tuck the four corners of the top layer underneath the bottom layer of dough.  Seal up any cracks, tears or holes by simply pinching the dough together.  Gently & slightly flatten all six pies & place them on the lightly oiled baking sheet.

Beat one large egg with one tablespoon of water.  Using a pastry brush spread this egg wash onto each of the pies.

Cook the pies on the middle rack of your 425* oven for about 15 minutes, rotate the pan & cook for an additional 8-10 minutes or until golden brown on top.

Remember, every oven cooks differently and, frequently, they distribute the heat unevenly.  I always rotate pastries in the oven, usually mid-way through the cooking time, to insure everything cooks evenly.

If you have any questions or comments about this recipe I would love to hear them.  I will be adding some of my favorite “tweaks” to this recipe, as well as many other recipes using puff pastry in the near future.  And, of course, there will be more recipes using spinach.