The automobile has always been a symbol of progress, status and prosperity.  That is usually the way it is with anything that is rare and expensive.  It’s difficult to believe, however, that chickens were once held in a similar lofty esteem—at least as a food source.  Equally astounding is that both cars and chickens were used in an unofficial campaign slogan to garner votes from the common folk for a Presidential candidate.

Herbert Hoover faced Al Smith in the 1928 Presidential race.  Supporters of Hoover declared he would provide every American with “a chicken in every pot and a car in every back yard”.  Hoover never publicly said this.  He did say, “We in America today are nearer to the final triumph over poverty than ever before in the history of this land… We shall soon with the help of God be in sight of the day when poverty will be banished from this land.”  These were inspiring words.  Hoover was a beacon of hope and foresight.  He beat Smith by a landslide.

Unfortunately for Hoover—and everyone else in Am 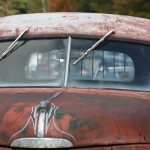 erica—the Stock Market took a nosedive six months after he was inaugurated, plunging the country into The Great Depression.  Car ownership for the majority of Americans would be stalled until after the Second World War—and chicken would be on the menu for only a select few.

The fact that chicken was a rare and expensive commodity eighty-four years ago—and right up until the late 1950’s—is that chickens were raised primarily for their eggs.  Eggs were a reliable food source as well as a source for barter and currency.  One hen is capable of laying up to twenty dozen eggs a year, with that output lasting reliably for about two years.  Thereafter, the chicken was headed off to the chopping block and sold at market—usually at a ridiculously higher price per pound than pork, beef, lamb or even lobster…and this, for a two-year-old bird, well past its prime in both tenderness and flavor.  Invariably, these tough old birds had to spend hours in the stew pot before they were edible.

Younger chickens—raised expressly for meat—were even more expensive than the laying hens that were forced into an early retirement.  Being younger, birds from two weeks old (Cornish hens) to eight weeks old (broilers & fryers) to less than eight months old (roasters) were tenderer.  This further inflated the cost, restricting demand to a wealthy few.

By the 1950’s middle class incomes had risen sharply as a result of the post-war-feel-good-about-everything boon, evolving a high demand for chicken.  This demand coincided with improvements in methods of avian husbandry, as well as cost-effective innovations in processing, packaging and distributing chickens.  Almost overnight, chicken became a weekly staple for most Americans.  In subsequent decades it would continue to grow in popularity, owing largely to the nationwide burgeoning of an ever-growing “foodie” culture, as well as rightfully being regarded as a healthier, less fattening protein alternative to beef or pork. 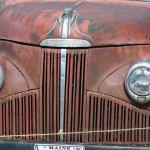 With regard to chicken and cars, one could correctly observe that the wheels of progress have turned slowly–but they did turn.  Prosperity sometimes begets poverty, but that is a relative observation.  A gallon of gas costs more than a chicken dinner.  Given a choice between the two, a plump chicken simmering all day in a pot renders a sweeter smell of success.

Thanks, Mr. Hoover, wherever you are.

My wife, Michelle, is the soup maker in our house.  Yesterday, after taking photographs for my blog entry, she combined the following ingredients in a one and a half gallon pot:

After two hours of having the warm, intoxicating aroma of fresh chicken soup taunt every one of our senses into a ravenous stupor, Michelle and I dug into the pot.  We skipped the usual process of making soup—draining the broth, picking meat from the bones, and finely chopping a new batch of vegetables.  Instead, we served ourselves large chunks of vegetables and hunks of succulent chicken in bowls, ladling the rich, steaming golden broth over all of it.

We replaced what broth we had taken with more cold water, returned the pot to a boil, again reducing it to a simmer and, two hours later, we dove into another batch of the soup.  It was even more delicious than the first batch.

I never like to see a good thing end.  Again, I replaced what broth we had taken with more cold water, bringing the pot to a boil, and then reduced it to a simmer for another hour.  By this time, I was so full of soup that it was all I could do to strain the broth and pick through the solid contents for a few more scraps of chicken.  This done, I refrigerated the chicken bits and a half-gallon of broth when it reached room temperature.

This morning, the broth was topped by a half-inch of chicken fat (also called schmaltz).  Michelle scraped the fat from the broth and stored it in a zip-lock bag to be frozen—likely to be used in combination with flour to make a flavorful thickener for a sauce or stew sometime in the future.  The broth had congealed to a dark block of solid mass.  This is a good sign for broth—the more dense it becomes after refrigerating, the greater the richness of flavor.

Today, Michelle will be making a chicken noodle soup, likely yielding another three large portions for each of us.  All in all, nearly a dozen delicious, nutritious and easily prepared meals will come of this, at a cost of about six dollars.  This value is further enhanced by the aesthetic pleasure of having the aroma of a simple meal enlighten the senses.  Such a thing is priceless.  It is the true soul of cooking. 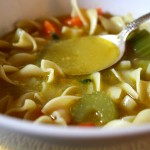