CHICKEN IN THE LAND OF SMILES

After a week of undertaking exhaustive research of the poultry industry of Thailand, I have arrived at two conclusions.  First, there are a lot of chickens and eggs in Thailand.  Second, I would rather cook and eat chicken and eggs than read about them. 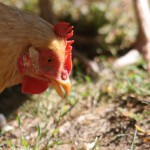 I had already surmised my first conclusion more than twenty years ago.  Then, over the course of five years, I spent the winter months in Thailand—this, as much to escape the frigid coma induced by the long winters of Maine, as it was a casual exploratory of a cuisine that was then just becoming popular in the United States.

Today, Thai cuisine continues to grow in popularity in our country.  There are three Thai restaurants within three miles of my home in Waterville, Maine—equaling McDonald’s in quantity within the same area, but far surpassing the Golden Arches in quality and nutritional provision.  Furthermore, restaurants here and throughout the country serve Thai-inspired cuisine, utilizing the once strange, alien ingredients in a vast array of fusion cuisine—an intermingling of one ethnic cuisine with another.

As with virtually all elements of their culture, Thais are extremely proud of their cuisine.  Rice (khao) is the central feature of every Thai meal.  The exclamation, “kin khao” (eat rice) is a declaration issued when it is time to eat, similar to Westerners using the phrase, “breaking bread” to connote a communal call to dinner.

Unlike Westerners, Thais mound large portions of rice on their plates, putting smaller portions of curries, stir-fries and other main course entrees to the side of it—principally using the rice as a means to extinguish the spicy heat of some of these courses, as well as demonstrating an indigenous trait of resisting overindulgence.  Evidence of this trait is particularly notable in that I have never seen an obese Thai.  Moreover, it is a polite custom in Thailand to always leave a little bit of food on one’s plate at the end of a meal.  This lets the host know that there was more than enough to eat, contrary the overindulgent Western custom of cleaning one’s plate.

Politeness is one of the key customs of Thai culture.  It is ingrained in their language, their reluctance to exhibit demonstrations of ill temper, a sincere hospitality towards foreigners (who they call, “farangs”), and the smiling demeanor of its people. This demeanor—and governance loosely constructed as a democratic constitutional monarchy—has rightfully earned Thailand the national moniker, “The Kingdom of Smiles”.

Thailand’s king, Bhumibol Adulyadej, is the official head of state.  He has the distinction of being the longest ruling monarch currently occupying a royal throne, as well as being the only one in history to be born in the United States (he was born in Massachusetts on December 5, 1927, while his father was attending Harvard).  Additionally, he is an accomplished and award-winning jazz musician, notably having played alto saxophone with Lionel Hampton and Benny Goodman.  Over the years he has generously distributed portions of his vast wealth for the benefit of his people, as well as mediating a number of coups against the elected Prime Ministry, always as an advocate of democracy for his subjects. 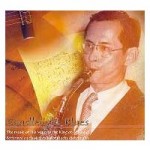 I have never eaten or prepared Thai “Royal” cuisine—it is a very complex, colorful and intricately prepared branch of the national cooking heritage…one reserved for dignitaries and the wealthy.  Instead, my knowledge of Thai cuisine is limited to “ah-han tammadah”—ordinary food that, though no less colorful or delicious, is more simply prepared.  As with Royal cuisine, flavor is balanced between any combinations of sweet, sour, salty, spicy and bitter flavors.  Knowing what ingredients produce these flavors is very simple.   So, too, is combining them to produce something delicious only a matter of measurement or a notion of personal preference…if you like something spicier, add more spice;if you like it sweeter, sweeten it more…and so forth.

Frequently, a Thai meal is served with an assortment of little bowls containing separate, individual ingredients to allow the diner to adjust the flavor of their meal to their particular tastes.  These include fresh chilies, chili pastes and powders, palm sugar, vinegar, lime juice, fried garlic flakes, dried shrimp flakes and the ubiquitous “nam plah” (fish sauce)—a fermented amber liquid extracted from heavily salted fish, and also the most prevalent ingredient in genuine Thai cooking.

Dipping sauces (“nam chim”) are also popularly served with Thai food, as much to liven up the blandness of rice—particularly the chewy, short-grained “sticky” rice which is eaten with the hands—as to add additional flavor and dimension to spring rolls or stir-fried rice or noodle dishes.

As a chef, my love of Thai cuisine is based largely on its flexibility.  This flexibility inspires endless possibilities of improvisation—characteristics that are also indigenous to the Thai people.  They are among some of the best teachers and cooks I have ever known.  Assuredly, their cuisine is an art form.  So, too, are living life without ill temper and a smile on one’s face—regardless of difficulties—an art form.  Perhaps it is a lost art form…but at least there is one kingdom where it still exists. 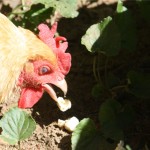 Chickens are everywhere in Thailand.  I’ve seen them scratching around in small jungle villages.  I’ve heard them crowing and squawking at odd hours of the night in cities like Bangkok and Chaing Mai.  I’ve even seen them flapping and fussing in the front basket of a speeding motorbike.  They are a common sight—living ones, as well as those that show up as the main course for any one of a number of Thai meals.

Gai Yang is the Thai version of barbequed chicken.  As with American barbeque, recipes differ from region to region.  Unlike the American method of barbequing—low and slow—Thai barbeque is a quicker process, done over low-temperature coals on a grill.  In the recipes I am providing I am going completely off of the grid by baking the chicken—a method seldom used to cook anything in Thailand.  Keep an open mind, though.  It yields the same result.

The most popular version of gai yang originated in the northeastern section of Thailand, called Issan.  Spiciness in this recipe relies heavily on black pepper and garlic.  Spiciness in gai yang from the southern provinces relies more heavily on red chilies or chili paste and garlic.  Both recipes are procedurally similar—a sauce is made in which the chicken is marinated for a day or two, the chicken is cooked and then served with a dipping sauce (nam chim) which adequately compliments the flavor of the chicken and the flavor of the sauce in which the chicken was marinated.

My favorite of the two versions of gai yang is the one from the south.  My version can be used as a dipping sauce or as a stir-fry sauce.  It is very versatile.  At the restaurant I once owned we used it with catfish—dredging fresh fillets of the fish in cornstarch, frying both sides until golden brown, removing it from the pan, draining any remaining oil from the pan and adding the sauce.  The hot pan would always sizzle loudly when the sauce was added to it, so I named it Thai Sizzling Sauce, saving the staff the troublesome task of memorizing any one of several genuine Thai names—such as, nam prik si daeng grattieum samrap gai yang…red chili and garlic sauce for barbecued chicken.  Ironically, this dish is easier done than said.

I will list the recipes for both the Southern and Northern versions of gai yang.  Both of them keep well in the refrigerator for up to a month.  I recommend sealing them tightly.  They have a strong but not unpleasant aroma.  As mentioned, both recipes are proceduraly the same, so just follow the directions following the recipes for both delicious versions of this delicious treat from The Kingdom of Smiles. 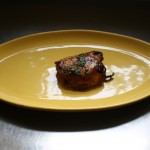 (Note: If you don’t have a mortar and pestle, you can coarsely chop these ingredients and then pulse them in a food processor.)

Crush the following with a large mortar and pestle:.

In a small bowl, dissolve 2 Tablespoons sugar in 2 Tablespoons of low sodium soy sauce, 2 Tablespoons dry sherry and 1 Tablespoon of rice vinegar or limejuice.  Add the crushed garlic, coriander, lemongrass and black pepper and mix well with a whisk

In a food processor, chop 10 large clove of peeled garlic, then add:

Run the food processor until the sugar is dissolved, then add:

Again, run the food processor for about 15-20 seconds, and then pour the finished sauce into a bowl. 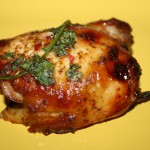 It is best to marinate your chickens for about two days before you cook them.  Both recipes will amply coat either four or five half chickens or—my preference—eight to ten chicken thighs.  Simply pour the sauce of your choice over whichever cut of chicken you choose…use half as much sauce on half as much chicken if you like, even though leftovers are delicious cold.  Tightly seal the sauce-coated chicken in heavy-duty zip lock bags.

When it’s time to cook the gai yang, preheat your oven to 400 degrees.  Line a pan large enough to hold all of the chickens with aluminum foil.  You will need a roasting rack inside of the pan.  If you don’t have one, a baking cooling rack will do.  If you don’t have one of these you can fashion a roasting rack out of stalks of celery in a crisscross pattern in the pan.  The whole idea of this is to minimize direct contact of the chicken to the bottom of the pan, allowing airflow, and evenly cooking the chicken and preventing it from burning.

Arrange the chicken—either thighs or halves—on the roasting rack.  For the thighs, cook them for about thirty to thirty-five minutes.  For halves, cook for about thirty minutes at 400 degrees; reduce the heat to 350 degrees and cook for an additional twenty minutes. 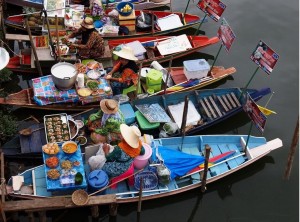 Many thanks to Roger Brooke for his contribution of pictures from Thailand–I probably never would have gone to the Land of Smiles without your encouragement.  Kop kheun kop, old buddy!