SOME “MUST HAVE” THAI INGREDIENTS 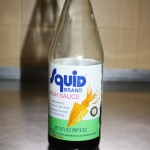 Fish sauce is probably the most commonly used ingredient in Thai cuisine.  It’s also used in Cambodian, Laotian and Vietnamese cuisine, in much the same way soy sauce is used in other Asian cultures.  Soy sauce may be used as a substitute in Thai cooking, but its flavor has a noticeable absence of authenticity.

One who is unacquainted with fish sauce will probably not experience love at first whiff.  Simply put, it smells like fish—salty fish that isn’t altogether fresh.  It is made from the liquid extracted from heavily salted fish, thereafter left to ferment for as long as a year to a year-and-a-half.

In spite of this rather gross—but honest description—fish sauce has magical properties.  When combined with other ingredients such as limejuice, vinegar, sweeteners and fresh herbs, the aroma and flavor are transformed into a delightful, rich saltiness.

I buy Squid Brand Fish Sauce—in one-liter bottles—from Asian markets.  If you don’t plan on using much fish sauce, or don’t have an Asian market nearby, most grocery stores sell small bottles of it that I have found are saltier than the brand I buy.  Ounce for ounce, these grocery store versions are much more expensive too.

Store you fish sauce in a cool dry spot in your kitchen.  Avoid storing it where there is a remote chance of spillage—particularly near clothing or upholstery.  One time, on a hot summer’s day, I spilled a mere few ounces inside of my car.  It took days of airing, scrubbing and deodorizing before my car stopped smelling like an untended dumpster. 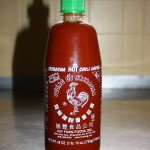 This very spicy red chili sauce gets its name from the city, Si Racha, located south of Bangkok on the coast of the Gulf of Thailand.  Huy Fong Foods makes a very good version of sriracha sauce, easily found in all major grocery stores in this country because it is made in this country.

Thai versions of sriracha sauce can be found in Asian markets.  Their versions tend to be a little sweeter and runnier than the Huy Fong Foods sriracha, but no less spicy.  Both are generally made with sun dried red chilies, garlic and vinegar, with the amount of sugar varying from brand to brand.  To me, the Huy Fong brand doesn’t taste sweet at all.

Even if you’re not preparing Thai food, sriracha sauce is a great way to add some hot spice to your food.  It’s a great alternative to Tabasco sauce.  It even works in a Bloody Mary! 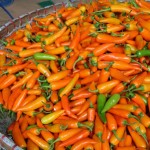 The first time I took a pinhead-sized bite of a Thai chili, my head, tongue, throat and stomach felt as if they had exploded in flames.  Thai chilies are one of the spiciest peppers on earth.  In Scoville Units–the scale of measurement used to determine spice heat in chilies–the Thai Prik Kee Noo scores between fifty to one hundred thousand units.  This is just above cayenne and Tabasco peppers, and only slightly below scotch bonnet and habenaro peppers.

“Prik Kee Noo” literally translates as “mouse shit peppers”.  They are about the same size as a mouse turd–and, as it did with me–my first bite evoked the cry of, “holy shit that’s hot!”.  Over consumption of these miniature fireballs will give one a clearer understanding of the expression, “a taste so nice it burns you twice”.

Fresh Thai chilies are hard to find in Maine.  Dried or frozen are accessible in Asian markets, but these can be a poor substitute for fresh.  Whenever I need a fresh chili pepper in a Thai recipe I use Serrano chilies–a much milder version of fresh chilies at a mere ten thousand Scoville units.  Given the intensity of Prik Kee Noo, this might be a wise–if not altogether genuine– substitute.

Many thanks to my Travel Guru and good bud, Roger Brooke, for contributing the header photo of this entry, as well as his sage advice on all things Thai or hilarious.