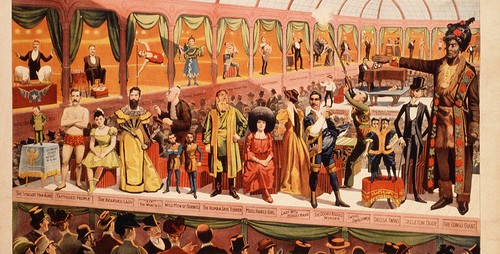 FOREWORD: WE BE THE FREAKS

“There’s a sucker born every minute”

Generally speaking, chickens are a dull topic.  I know this, first hand.  I spent weeks researching facts about chickens on the internet, preparatory to writing a few recipes and essays.  The only information worthy of retaining would amount to about a minute of small talk and, maybe, enough answers to fill a full category of  Jeopardy.  That is, with one exception–an exception so extraordinary that I was inspired with a sense of evolutionary, cultural and historical enlightenment. 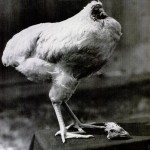 The source of my enlightenment was a rooster, born some time in 1945 on a farm in Fruita, Colorado.  The owner of the farm, Llyod Olsen, named the rooster Mike.

Little is known of Mike’s early roosterhood since, at best, roosterhood isn’t usually a condition of longevity.   One could assume that there was a lot of pecking, clucking and cockle-doo-a-dooing.  One could also assume that, by Olsen christening him with a name, a bond of familiarity existed between Mike and him.  If such a bond existed, Olsen heartlessly broke it on the day his hungry mother-in-law came for a visit.

On that day–September 10, 1945–Olsen’s wife instructed him to select a chicken to be that evening’s dinner for the visiting mother-in-law.  Olsen–obedient to his wife but not to the bonds of friendship–selected Mike.  Wielding an ax, Olsen snatched up Mike to do the deed.  It is not known if Mike put up a struggle.  Neither Olson nor Mike–especially Mike–had any clue that both of their lives were about to change.

And then…Olsen swung the ax…and Mike–as all chickens do when their heads are chopped off–ran around like, well, you know.

There was only one problem, though.  Mike continued to run around with his head cut off, evading pursuit and capture by the hungry, bloodthirsty Farmer Olson.  Tired of chasing Mike, Olsen realized that he had completely screwed up the decapitation.  Subsequent evidence revealed that Olson had missed the jugular vein and, although most of Mike’s head was gone, his brain stem and one of his ears remained intact.  It is not known what the Olsons had for dinner that night…but it wasn’t Mike.

Miraculously, the next day, Mike was still alive and had calmed down from the trauma of the previous day.  A blood clot had formed in his neck and the bleeding had stopped.  Amazed and remorseful, Olson retrieved an eyedropper from the farmhouse and began feeding Mike a mixture of milk and water. Mike was revitalized and continued to gain strength as the days passed.  Eventually, Olsen began giving Mike bits of grain which he would gently insert into the cavity created by the missing head.  Mike, unable to either cluck or crow, gurgled his delight and continued to gain strength.

His cockle-doo-a-dooing days were over, but his days of stardom had begun.  At some point, Olsen looked into Mike’s gurgling neck pipe and saw dollar signs.

Olson took Mike on the road.  Billed as Mike The Amazing Headless Chicken, he became the featured attraction at dozens of carnival sideshows throughout America.  His fame grew.  He was featured in both Life and Time magazines, and delighted fans wherever he toured.  The money rolled in for Farmer Olson, too. 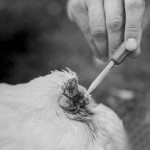 Sadly, for both Olsen and Mike, fame was fleeting.  After a year and a half of touring, basking in the accolades of countless fans, Mike met a fate under similar circumstances many rocks stars would meet, decades later.  Sometime in March of 1947, Mike sadly died in a motel bathroom.  He was two years old.

One might speculate that Mike’s sad but predictable death was symbolic of the death of the carnival freak show.  It was, rather, more symbolic of a change of venue.

At the time of his death, television was beginning its ascendancy as the principle domain of entertainment in America, eventually evolving into the behemoth of ballyhoo that it is today.  Excluding the traditional as well as historical exhibition of curiosities and pure freakishness from this venue would be un-American, causing the likes of Farmer Olson and even the great P.T. Barnum to roll over in their graves.  And, too, it would deny the great multitude of rubes the simple pleasure of being shocked, horrified and amazed–and, perhaps, that uncommon feeling, however brief, of feeling fortunate and normal.  Most importantly, all who are the object of this gawking would be denied the great reward of attaining both celebrity and fortune–the brass rings of success in contemporary American culture.

A lesson can be learned from the story of Mike The Amazing Headless Chicken.  In one sense, we are the rubes and gawkers, drinking in the weirdness of the extraordinary to buy momentary respite from the dull and commonplace.  The great carnival wasteland of television provides this for us, ad nauseum.  But we are, too, the freaks–unsuspecting, yet willing to make the best out of an awful situation; and this, all one could hope, without losing our heads over it.

Somewhere in that great chicken coop in the sky Mike is gurgling his encouragement. 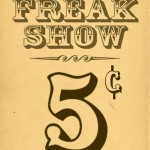 PLEASE STAY TUNED FOR FUTURE EPISODES OF THE CARNIVAL WASTELAND!